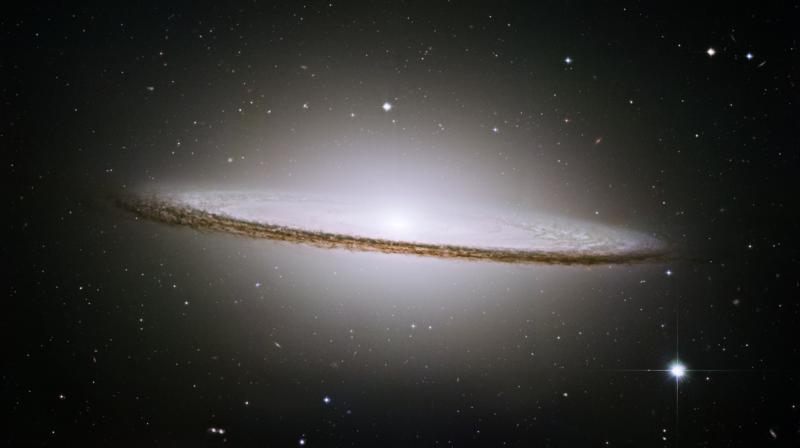 The twelve best photos taken in all the universe?

Whether or not you agree with mythologist Joseph Campbell, who said God is the greatest unknowable mystery, viewing these photographs may give you the sense that you are watching some great power in action.

No matter your belief in a divine intelligence, anyone can enjoy these amazing images and help celebrate the 30th anniversary of NASA’s launch of the Hubble space telescope into orbit.

Hubble’s low Earth orbit is outside the distortion of Earth’s atmosphere which allows it to capture extremely high-resolution images with substantially lower background light than ground-based telescopes. A vital research tool that opens a deep view into space, many of Hubble’s observations have led to breakthroughs in astrophysics, such as determining the rate of expansion of the universe.

The only space telescope designed to be maintained in space by astronauts, a new Wide Field and Planetary Camera was transported to the Hubble via space shuttle two decades ago. These are some of the remarkable images photographed since then, especially when utilizing the newer Advanced Camera for Surveys, which makes pictures using ultraviolet wavelengths.

Many of the most remarkable photographs focus on nebulae. A nebulae (Latin for “mist”; plural form, nebulae) is an interstellar cloud of dust, gas, and plasma, a place where stars form. 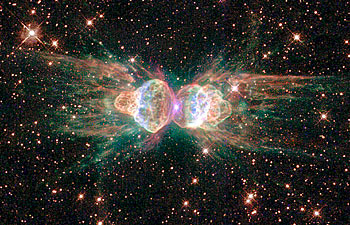 12) The Ant Nebula, is a cloud of dust and gas (scientific name, Mz3), that resembled an ant to observing scientists on Earth who were using land-based telescopes. The nebula is found within our own galaxy between 3,000 and 6,000 light years from Earth. 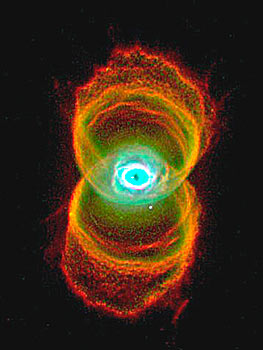 10) The Hourglass Nebula surrounds a dying star 8,000 light years away. Its hourglass shape have been created from stellar winds that are weaker in the core or possibly from an unseen companion star and accompanying gravitational effects. 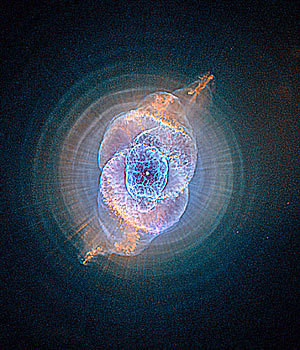 9) The Cat’s Eye Nebula is a planetary nebula in the constellation of Draco. Structurally, it is one of the most complex nebulae known, with photos revealing remarkable structures such as knots, jets and sinewy arc-like features. Did the Lord of the Rings film director base his imagery for The Eye of Sauron on this Cat’s Eye? 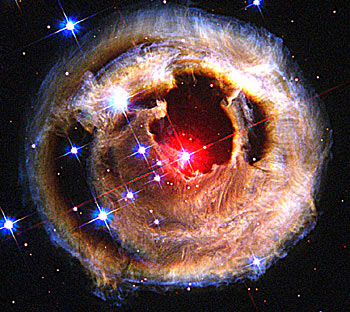 8) Starry Night is so named for the way it reminded astronomers of the Van Gogh painting with its spirals of dust swirling across trillions of kilometers of interstellar space. The illumination of dust comes from the red supergiant star at the middle of the image, which gave off a flashbulb-like pulse of light two years earlier. The star, V838 Mon, is located at the outer edge of our Milky Way galaxy, about 20,000 light-years from Earth. 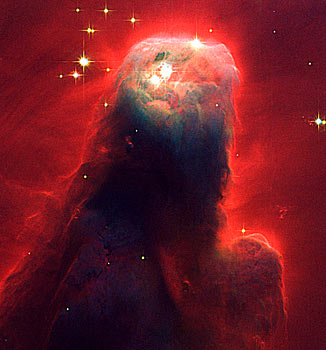 7) The Cone Nebula is a craggy-looking mountaintop of cold gas and dust, a turbulent place where stars are ever in the process of being born. The part pictured here is 2.5 light years in length (the equivalent of 23 million trips to the Moon). 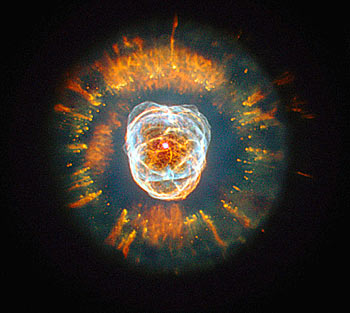 6) The Eskimo Nebula
is a Sun-like star nicknamed because it resembles a face surrounded by a fur parka. The hood is, in fact, a ring of comet-shaped objects with their tails streaming away from the central, dying star. Although the bright central “face” resembles a ball of twine, it is actually a bubble of material being blown outward by the central star’s intense “wind”. 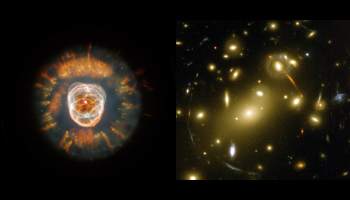 In the second picture, Eskimo, which is 5,000 light years from Earth, is shown next to a hefty cluster of galaxies in the constellation Draco, 2 billion light years from Earth. The cluster is so massive that its enormous gravitational field deflects light rays causing a phenomenon that magnifies, brightens, and distorts images further away. The cluster’s magnifying powers provide a powerful “zoom lens” for viewing distant galaxies that could not otherwise be observed. Thus, the arc-shaped patterns found throughout the picture present distorted images of very distant galaxies, lying 5 to 10 times farther away.

5) The Eagle has risen: Stellar spire in the Eagle Nebula

Perhaps one of the most famous and easily recognized space objects, this spire is a birthing chamber for stars in the constellation Serpens.

“Appearing like a winged fairy-tale creature poised on a pedestal, this object is actually a billowing tower of cold gas and dust rising from a stellar nursery called the Eagle Nebula. The soaring tower is about 57 trillion miles high.” (The nearest star outside our Milky Way galaxy, Alpha Centauri, is 25 trillion miles away or 4.3 Light Years).

Stars are born in this chaotic place and their newly-found energy sculpts fantasy-like landscapes in the gas. Hot and massive young stars [off the top of the image] are eroding the pillar with torrents of ultraviolet light and illuminating the tower’s rough surface.

Ghostly streamers of gas can be seen boiling off this surface, creating the haze around the structure and highlighting its three-dimensional shape.

4) The Sombrero Galaxy is 28 million light years from Earth, this galaxy is as spectacular as its appearance. It has 800 billion suns and is 50,000 light years across. Its hallmark is a brilliant white, bulbous core encircled by thick dust lanes revealing the spiral structure of the galaxy. 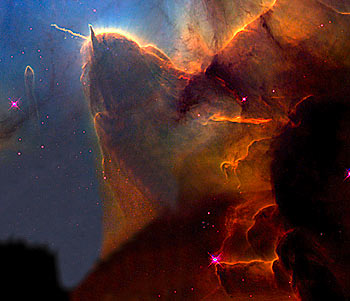 3) The Trifid Nebula is a stellar nursery, being torn apart by radiation from a nearby, massive star. The picture also provides a peek at embryonic stars forming within a cloud of dust and gas, which is destined to be eaten away by the glare from the massive neighbor. This stellar activity is an example of how stars like our Sun are intimately connected with powerful siblings. 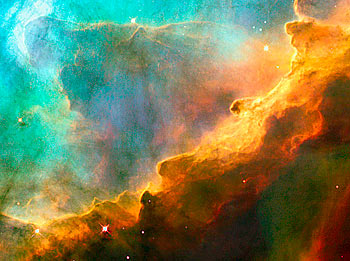 2) A Perfect Storm of Turbulent Gases: Omega/Swan Nebula- A small region in the Swan Nebula, 5,500 light years away, is described as ‘a bubbly ocean of hydrogen and small amounts of oxygen, sulphur and other elements. 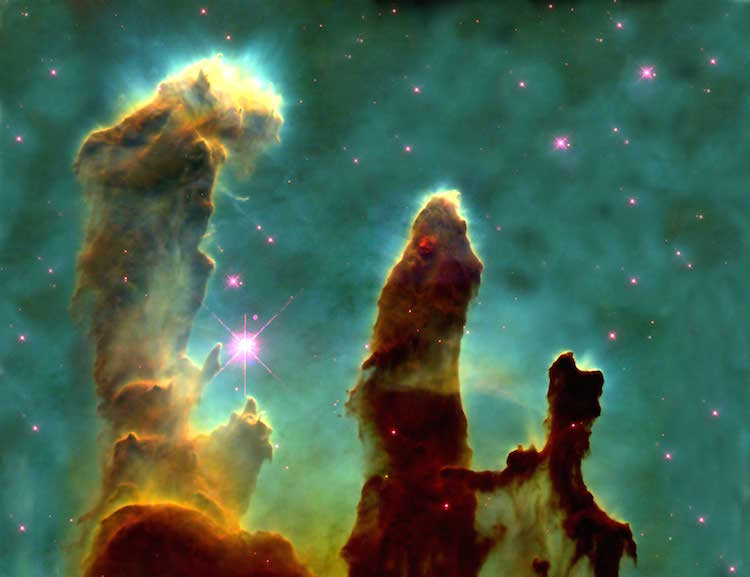 1) Pillars of Creation in a Star-Forming Region

Undersea corral? Enchanted album cover for the rock group, Yes? This is one of Hubble’s most famous images: Pillars of Creation, where stars are forming in the Eagle Nebula.

These massive structures—the tallest pillar is 4 light-years long from base to tip — are actually columns of cool hydrogen gas and dust, the incubators for new stars. Several newborn stars, hot and bright nearby, are causing a type of evaporation wearing away the edges of the gaseous pillars. These especially dense clouds of hydrogen act like stalagmites emerging from a huge and dark molecular cloud below the frame. We nominate this one as The Best Photo in all the Universe. (Download photos from Hubble, here, or view the entire collection at the Hubble Gallery)